The incidence of plagiocephaly (asymmetry), brachycephaly (excessive width) and scaphocephaly is rising. Infants wearing a cranial remolding orthosis is becoming a more familiar and acceptable sight. It is important to treat these malformations in order to reduce risk of ear infections, jaw misalignment, temporomandibular joint disorder ( TMJ ), and orbital asymmetries (causing vision and balance problems). Not to mention the social stigma associated with an unusual looking head and face. The key to a successful outcome is early detection and treatment and compliance with a treatment program.

Early detection provides the opportunity for re-positioning efforts. Such efforts are most successful in a young infant and especially during the first 12 weeks, but even up to 4-6 months of age. These efforts are usually insufficient when the flattening or asymmetry is severe. In these cases, the most effective treatment is a cranial helmet/band. Early detection also gives the physician and orthotist the opportunity to capture a 3 dimensional scanned image using modern technology in order to track repositioning, physical therapy progress and cranial remolding success over the course of the treatment plan.

When a cranial orthosis is indicated, its treatment principals are universal. Custom molded helmets work by holding the heightened or pronounced areas of the infant’s skull and leaving room in the helmet for the less developed areas of the skull to fill in. The growing brain follows the path of least resistance and grows into areas of the skull that are not under resistance, resulting in, over time, a more rounded and even skull shape. This “re-directed” growth appears to have no negative effects on brain development in any way.

Helmet therapy is contraindicated in a condition called craniosynostosis in which the sutures in an infant skull fuse prematurely. It is extremely important to diagnose this condition early, as the closed suture(s) must be opened surgically prior to using a cranial molding orthosis. Parents are encouraged to speak to their pediatrician for a referral to a pediatric neurosurgeon and orthotist when they are concerned about flattening, asymmetry or disproportion of their infants head. Early detection is key in developing appropriate treatment protocols and optimal outcomes.

Once a diagnosis is made and a prescription is written, the orthotist examines the infant and discusses the treatment program which can include repositioning efforts, therapy treatment for congenital muscular torticollis, and when and if indicated a cranial remolding helmet/band. In this way, a coordination of treatment is maintained between the infant’s parents, physical therapist, orthotist and the referring physician. Almost all infants show an improvement in overall head shape during the course of treatment with the best outcomes occurring with younger infants’ The “sweet spot” for therapy is within the range of four to eight months of age, although infants can still achieve significant results up to eighteen months of age.

Nouveau Prosthetics and Orthotics is a full service biomedical facility providing state of the art artificial limbs and braces.

We specialize in pediatrics and can create custom orthotics for infants thru teenagers.

Some of the custom pediatric services we provide include: 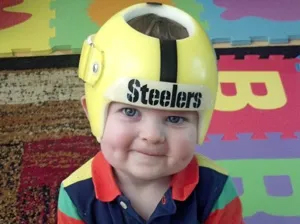 Our caring and professional staff has recently celebrated 35 years treating our patients. Nouveau Prosthetics and Orthotics has locations convenient to our patients and have arrangements in place to help meet our patients financial and insurance needs. We also provide educational and consultation services upon request.