Families or pediatricians who have a neurologic concern about a child can refer the child to our neurology team for a comprehensive neurologic evaluation. We offer a child-centered approach that utilizes the latest technologies and techniques. Our emphasis is on a thorough workup using the latest technology to get to the root causes of the symptoms and then multidisciplinary approaches to treat the whole child.

We specialize in treating children with:

Our Pediatric Neurology Team uses the most advanced technology and resources to provide each child with individualized treatment. In office we have Neurocognitive Testing, Autonomic Testing and Pharmacogenomics.

What is Neurocognitive Testing?

Neurocognitive Testing is an assessment procedure that utilizes scientifically validated, objective, and reliable computerized neuropsychological tests to evaluate the neurocognitive status of patients. The testing covers a range of mental processes from simple motor performance, attention, and memory, to executive functions. Age-standardized scoring of the assessment eliminates variability and rater bias. The assessment can be repeated over time to monitor progression of disease and/or response to treatment. A pattern of your child's strengths and weaknesses can be developed and the information is used to help diagnose the type of epilepsy and plan treatment. The evaluation will assess:

What should you bring to the Neurocognitive Test?

The neurocognitive testing platform we use is entirely computerized-based. Be sure that if your child needs glasses, that he/she brings them on the day of the test. Ensure that your child had a good night sleep the night before the examination.

If your child is on medications, be sure you know whether or not the medications are supposed to be given that day.

The entire testing should take around one hour. At the next visit, you will receive a comprehensive report detailing the findings of the test. 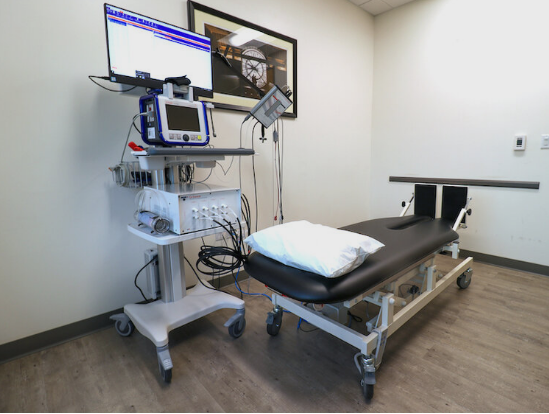 What is Autonomic Testing?

What happens during Autonomic Testing?

During Sudomotor Testing, wires with a sticky end are attached to the hand.  An electric pulse (so small that you will not even feel it) is sent through the wire to test whether there is a “sudomotor” response.  Such a response is one sign of a healthy autonomic nervous system.

Autonomic Testing is not painful.  There are no needles and no radiation.

Why do I need Autonomic Testing?

How do I get results of the Autonomic Testing?

PREPARATION FOR THE TESTING

(3)   If you have a pacemaker, vagal nerve stimulator, or implantable device, please let the technician know prior to your procedure.

There are over 270 medications containing warnings, precautions and dosage recommendations based on specific gene variants. Your body has unique ways of responding to treatment based on your DNA. Pharmacogenomics is a state-of-the-art tool in personalizing your treatment.

Why do Genetic Testing?

Many neurologic disorders have a genetics component. We work with a genetics team that can search through all of your child’s and family’s DNA to try to get to the root cause of the symptoms Ask the Pediatric Neurology team at your next visit.