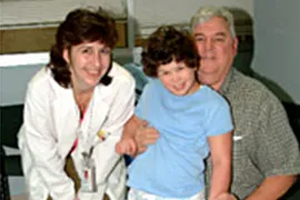 Sudain of Bergenfield, age 12, wants to ride a bicycle and walk his mom down the aisle when she gets married this summer. Kenny of Jersey City, age 13, wants to walk without assistance and play basketball. Caroline of Wall, age 8, wants to open up her fist and throw things away all by herself. Kloye Chayka of Rutherford, age 4, wants to run and play without tumbling. These are big dreams for children with cerebral palsy — big dreams that could become a reality due to today’s advances in pediatric neurosurgery at Hackensack University Medical Center.

SDR is a surgical procedure performed in the lower back region by pediatric neurological surgeons to diminish spasticity in the lower limbs. Sensory nerve fibers, dorsal to the spinal cord, are identified and stimulated electrically. Fibers generating unusual electrical activity are selectively cut (rhizotomy) in order to improve muscle spasticity.

Using specific criteria, each child is evaluated by a highly skilled multidisciplinary team of specialists at Hackensack University Medical Center. An individualized treatment plan, inclusive of physical therapy and counseling, is selected and designed for the patient based on diagnosis.

Pediatric neurosurgeon, Catherine A. Mazzola, M.D., director of The Neuromuscular Center, a division of The Pediatric Neuroscience Institute at Hackensack University Medical Center, is the first to perform selective dorsal rhizotomies in the State of New Jersey. Dr. Mazzola also performs several types of innovative neurosurgery for spasticity relief. She is the physician treating Sudain, Kenny, Caroline, and Kloye.

“Kenny was diagnosed with moderate to severe spastic diplegia and underlying weakness. He used a walker at school and a wheelchair for long distances. Our team of specialists believed a selective dorsal rhizotomy would diminish his significant spasticity,” said Dr. Mazzola. “Sudain was delayed in meeting most of his major milestones due to cerebral palsy. Though he didn’t use a walker or crutches, his way of walking, his gait, was compromised and could be improved. We recommended the dorsal rhizotomy to control spasticity in both his lower extremities. I am delighted to say Kenny and Sudain had the surgery, each within one day of one another, and are doing very Pictured from left: Catherine A. Mazzola, M.D., director of The Neuromuscular Center, a division of The Pediatric Neuroscience Institute at Hackensack University Medical Center; Caroline of Wall, age 8; and father William. well,” she reports.

Friendships developed rapidly between Sudain and Kenny as they spent more than six weeks as roommates during inpatient physical therapy. Their families became an instant support group during recovery. Each speaks highly of the decision to move forward with the SDR.

Kenny’s sister, Nakita and her husband, Gary, are in awe of his accomplishments. Nakita said, “Kenny’s knees were always bent. He started collapsing in school ” children assisted him from class to class. It would physically hurt Kenny to stand up.” Gary added, “Since the surgery, his walk has changed so much and there’s a big difference in his demeanor. It’s amazing!”

“The day after Sudain’s surgery, I could see the tightness already improved. Days after he returned home he was outside playing. Dr. Mazzola told us the dorsal rhizotomy would help him do the things he wanted to do. He’s doing great,” said his mother Feonia Joseph.

Both boys are marking personal milestones. “I sleep with my legs straight now. I could never do that before. The first day I got home from the hospital, I walked to the carnival with my mother (without crutches or a walker),” a proud Sudain reports.

“I sleep with my legs straight now, too. And when I sit up in bed, they’re straight. When my cousin saw me for the first time, after I got out of the hospital, he couldn’t believe how tall I am. He said, “You’re taller than me!” beamed Kenny. He has also become less reliant on a walker since the surgery and tends to use it only when he’s feeling tired or needs to take the stairs. Kloye Chayka of Rutherford, age 4 As each child”s medical history is distinctive, other comprehensive treatment options are available for CP patients.

Kloye is diagnosed with a mild form of spastic cerebral palsy affecting her left side. Her mother, Michelle, shares, “Kloye, was a child who fisted a lot and was unable to open her left hand. She developed difficulty in walking, going up and down stairs, and began tripping and falling a lot.” As part of her treatment, Kloye receives Botox injections every three to four months to reduce spasticity in all the muscles involved. Physical therapy, twice a week at the medical center and twice weekly at school, helps Kloye to strengthen and tone muscles she wasn’t able to use before. “Kloye really improved very quickly after she began treatment with Dr. Mazzola. She uses her left hand now, no longer walks on her toes, rides a pedalo bicycle at physical therapy, and climbs stairs with greater ease,” added Michelle.

Caroline’s adoptive parents, Bill and Kim, were told by various medical specialists there was no hope for Caroline. They were told she would never progress due to a cocaine addiction started in her birth mother’s womb coupled with a diagnosis of severe CP. Caroline’s disorder claimed all her limbs. She was unable to walk, use her hands, or function without constant assistance. In fact, she was unable to sit up straight, as muscle contractions caused her to be almost completely folded over at the waist. In addition, her vocal cords were affected limiting communication and resulting in major cognitive skill delays.

Despite the news, her parents never gave up hope and looked for ways to improve Caroline’s quality of life. They found support in Hackensack University Medical Center’s team of physicians and readily took their advice when the team recommended Caroline try Baclofen Pump Therapy.

The Baclofen Pump is a neurosurgical technique used to reduce muscle contractions in people who suffer severe spasticity from CP, multiple sclerosis, stroke, traumatic brain injury, or spinal cord injury. The pump, surgically placed in the lower abdomen, acts like a medicine reservoir delivering baclofen directly to the spinal nerves to improve spasticity.

According to her parents, Caroline’s life improved tremendously after Dr. Mazzola performed the procedure. Prior to surgery, Caroline wore leg braces and her toes were curled to the point she was unable to wear shoes or sneakers. Today, Caroline is wearing some great sneakers. She stands with assistance, sits upright, holds her own beverage or snack, motors around in her wheelchair, throws things away by herself, enjoys school, attends physical and speech therapy, and looks to the future with hope and confidence.

Dr. Mazzola encourages families of children with CP to contact The Pediatric Neurosciences Institute at the medical center, “We want people to know there are answers and options available to them. We have a team of specialists here at Hackensack University Medical Center dedicated and committed to improving the lives of children.”

Sudain and Kenny offer their own advice to families of children diagnosed with cerebral palsy.